Studying history to manage expectations about the future comes with a truckload of caveats, but for rare events, such as the current coronavirus crisis, the past is one of few tools for developing perspective. The obvious precedent for the world’s current woes is the Great Influenza Pandemic of 1918-1920, which killed an estimated 39 million people around the world—roughly 2% of the population at the time. A National Bureau of Economic Research (NBER) paper, released earlier this month, digs deeper into that pandemic for insight into Covid-19 fallout that continues to wreak havoc on a global scale in 2020.

Studying the century-old crisis shows that economic activity around the world suffered a sharp decline as virus blowback accumulated. Analyzing data for 43 countries, the NBER paper reports that “regressions with annual information on flu deaths 1918-1920 and war deaths during World War I imply flu-generated economic declines for GDP and consumption in the typical country of 6 and 8 percent, respectively.”

The impact on financial markets wasn’t trivial, either. “There is also some evidence that higher flu death rates decreased realized real returns on stocks and, especially, on short-term government bills,” write Robert Barro, an economics professor at Harvard, and his two co-authors in “The Coronavirus and the Great Influenza Pandemic: Lessons from the ‘Spanish Flu’ for the Coronavirus’s Potential Effects on Mortality and Economic Activity.”

The paper also points to what’s possible for the course of the current pandemic. The influenza of 1918-1919 came in three primary waves, Barro and his co-writers report. It started in the spring of 1918, followed by the most lethal period later in the year: September 1918 to January 1919. A third wave struck in February 1919 to June 1920. The three periods of assault remind us that remaining vigilant this time is a high priority for the foreseeable future. 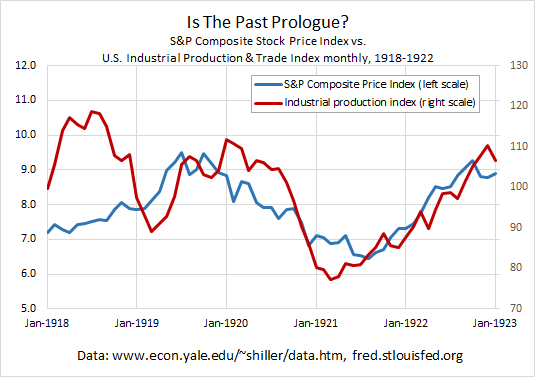 For the macroeconomic analysis, a key analytical challenge for the 1918-1920 influenza crisis is disaggregating the flu’s impact from the fallout due to World War I (1914-1918) and its aftermath. The researchers attempt to adjust for the war factor and decide that “the pandemic could have caused a substantial number of rare macroeconomic disasters in the sense of declines in real per capita GDP by 10 percent or more.”

Whatever the cause, the U.S. was an economic victim in the post-World War I period. America suffered a 12% decline in GDP and a 16% in consumption during 1918-1921. But the pandemic probably wasn’t the main driver of the recession, the authors advise. “Although there were substantial declines in GDP and consumption in 1919 and 1920, the largest decreases were in 1921 (6 percent for GDP and 7 percent for consumption), well after the peak of the U.S. flu death rate in 1918.”

The most ominous aspect of the study is using the 1918-1920 pandemic to estimate the health crisis in the current crisis. “Our findings show that, keeping everything else constant, the flu death rate of 2.0 percent out of the total population in 1918-1920 would translate into 150 million deaths worldwide when applied to the world’s population of around 7.5 billion in 2020.”

Although World War I was probably a bigger factor in the recession that followed, the paper still finds evidence that implies there will be economic blowback in 2020 from Covid-19. The implied death rate for the coronavirus implies a 6% decline for GDP in the “typical” country and an 8% slide in private consumption.

“These economic declines are comparable to those last seen during the global Great Recession of 2008-2009,” they authors report. “Thus, the possibility exists not only for unprecedented numbers of deaths but also for a major global economic contraction.

The results also show that the 1918-20 pandemic was accompanied by substantial short-term declines in real returns on stocks and short-term government bonds, driven by declines in economic activity and also higher inflation.”

The paper ends on a relatively positive note. “The probability that COVID-19 reaches anything close to the Great Influenza Pandemic seems remote, given advances in public-health care and measures that are being taken to mitigate propagation.”

Of course, trying to measure relative pain across time doesn’t help the victims in 2020. There will be consequences, economically and otherwise. As the paper points out, policy makers face a difficult tradeoff “concerning lives versus material goods.”