In simplest terms, investing in equities is straightforward. Corporate stock, for the most part, comes in one format (common stock), and what to pay for it can be boiled down to the present value of the projected future income stream generated by the company.  In addition, the stock market is very transparent, and trading costs are practically nil.

Evaluating bonds, by contrast, is the financial equivalent of a multi-dimensional chess game, courtesy of multiple risk factors that influence return expectations, including credit, duration, prepayment and inflation, to name a few. Adding to the complexity: a given issuer may have several bond types in circulation (senior secured, subordinated, convertibles, etc.), each with its own distinctive risk-return profile.  Moreover, bonds are usually thinly traded relative to stocks, and bond pricing is much less transparent.

The complexities associated with bond trading might give the impression that fixed income represents fertile ground for an active approach. After all, with a wider set of systematic risk factors to exploit (compared with stocks), common sense might suggest that the conditions are favorable for a fixed-income (FI) manager to generate alpha. PIMCO, a leading bond manager, made this case explicitly in 2017, noting that a substantially higher portion of active bond managers have outperformed their benchmarks as compared to equity managers.  Of course, that’s what you’d expect an active fund manager to say, but this raises a new question, namely, what is the source of this outperformance?

The traditional answer has been that bond markets are less efficient than stocks. However, a new study by AQR Capital Management (AQR) challenges this often-repeated rationale.

AQR concedes that fixed-income managers have earned higher risk-adjusted active returns compared with the average U.S. large-cap equity manager. But the firm’s researchers find that assuming this outperformance equates to “true alpha” is presumptuous at best.

“Across multiple categories of active FI managers, we detect little evidence of manager skill — either in aggregate or individually,” report three AQR authors in “Active Fixed Income Illusions.” The paper points to relatively high correlations between active returns and several traditional bond risk premia. The correlation is “very strong” with credit excess returns in particular – 0.94 in the context of the U.S. Aggregate-benchmarked managers, for example. 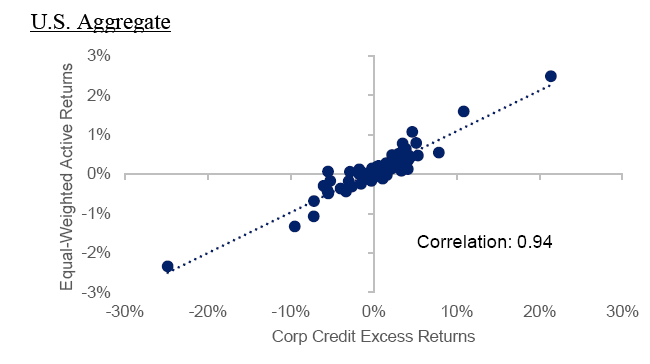 The authors conclude: “[D]espite impressive active (excess of benchmark) returns posted by a variety of active FI managers, once we control for well-known traditional risk premia, the residual alpha appears to be negligible, a result with important implications for asset owners.”

The implication: active managers aren’t minting true alpha so much as they’re tilting portfolios toward one or more widely recognized risk factors – risk factors that are available in lower-cost index funds.

One line of defense for active managers is that tactical shifts toward risk factors (and avoiding or de-emphasizing others) is valuable and qualifies as genuine alpha. Perhaps, but even if that’s true, there are key issues to consider before deciding that active management strategies are superior for bond portfolios, starting with the higher fees typically associated with actively run funds.

The question, then, is whether paying extra for a manager to tilt a bond portfolio to capture excess return is worthwhile? The only reasonable answer: it depends. Favoring an active fund can make sense if the fee isn’t too high and there’s a high degree of confidence that a manager can generate alpha over an extended period of time.

Even when a higher active fee appears to be compensated by a fund’s historical results, the question remains: Will the manager’s prior outperformance persist? Developing confidence on this front isn’t easy, largely because it’s a task that requires extrapolating risk and return history into the future, often on the basis of a limited track record.

Do some managers pass the test? Sure, although they’re the exception—and not just for bond strategies. Indexing, by contrast, is more reliable in the sense that you’re virtually guaranteed to receive the beta, usually at low cost. That’s a tough act to beat in active bond portfolios after correcting for risk and the extra expenses.