Minimizing loss while pursuing return animates every investment strategy, but behind any and all efforts to actively sidestep red ink lurks a perennial question: Will it work?

There are no easy answers for the simple reason that every investor’s risk tolerance, objective, time horizon, and other factors are unique. In search of context, however, there’s an obvious place to start: comparing how various hedging strategies stack up.

Campbell Harvey (a professor at Duke University) and several co-authors from the Man Group (one of the world’s biggest hedge fund groups) do some of the legwork by reviewing several equity market hedges In their Paper entitled: in “The Best of Strategies for the Worst of Times: Can Portfolios be Crisis Proofed?”. The key take-away: “Hedging equity portfolios is notoriously difficult and expensive”.

The paper, published in The Journal of Portfolio Management earlier this year, focuses on several “defensive strategies” during eight of the deepest drawdowns for the U.S. stock market (S&P 500) between 1985 and 2018. (Note: results analyzed in this column are based on the working-paper version.)

In the best-case scenario, an effective hedge would be established just ahead of a drawdown. But that’s setting the bar too high sans perfect foresight. A more practical approach, at least as a baseline, is to consider how hedges compare through time.

Figure 1 below shows a subset of the strategies’ long-term results. As you might expect, for some hedges, the results aren’t pretty.  A continuous position in long puts in particular is especially costly over the 1985-2018 sample period. 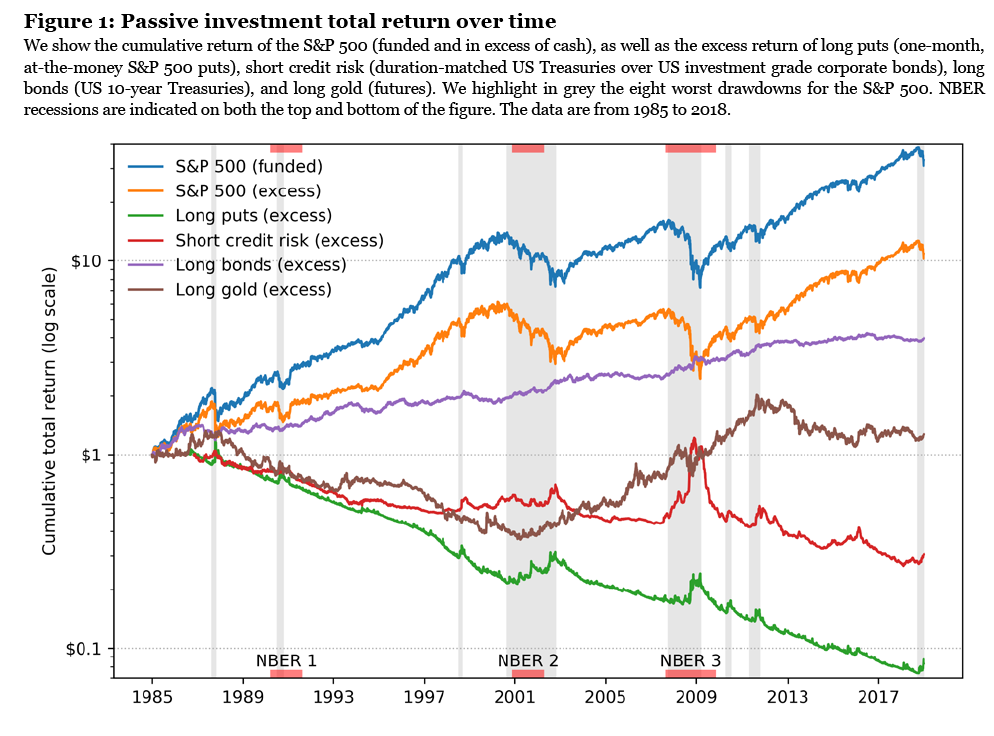 The good news is that puts have an encouraging record as protection from sharp and sudden equity drawdowns. The “hit rate” – the percentage of positive returns during equity drawdowns – is an enviable 100%. But the cost of a seemingly foolproof hedging strategy is hefty, largely due to rolling the options. Indeed, during the “normal” period – times other than during the drawdowns — this hedge lost more than 14% in annualized terms.

“Once a drawdown has begun, the subsequent rolls of the options become more expensive as implied volatility rises, increasing the cost of the hedge,” Harvey and his co-authors advise. “This effect then requires accelerated price decreases to produce the same hedge return.”

Advocates of puts will counter that using this hedge only during periods when drawdown risk is elevated but not yet kicked in will improve the historical profile. True, but an effective strategy for this variation requires a relatively high degree of success in anticipating steep drawdowns – a task that’s surely the exception to the rule for most investors.

Hedging with “safe-haven” assets is an alternative defense. Studying the 1985-2018 period using long Treasury bonds, for example, the paper documents a hit rate of 75%. But that less-than-perfect record was more than tolerable courtesy of a roughly 3% annualized performance during the “normal” period.

A long gold strategy also fares quite well during sharp equity drawdowns (88% hit rate). The fractional loss during the “normal” period, however, is a reminder that the potential hedging benefits are lower than it appears by looking solely at the precious metal’s performance in stock market declines.

The paper reviews several other hedges, including active equity strategies based on momentum, which arguably posts the most-compelling results. The hit rate is 100% and the “normal” period returns are moderately positive for a momentum strategy using a relatively short-term look-back window (1 or 3 months). By contrast, the hit rate drops for a 12-month look-back, although this is offset somewhat by a higher “normal” period performance for an unconstrained version of the strategy.

The authors also compare how the hedges performed during the five US recessions during the 1985-2018 span for additional context. Not surprisingly, the results are different vs. the eight drawdowns. For example, a long-gold hedge posts a modestly lower hit rate (67% vs. 88% for drawdowns). A long puts hedge also suffers when viewed through a recession/expansion lens vs. drawdowns: the 100% hit rate falls to a relatively mediocre 67%.

Although hedging strategies come in many shapes and sizes (and only a small subset are reviewed here), the paper is worth a close read for anyone thinking of trying to sidestep the recurring bouts of financial gravity that periodically weigh on the stock market.

Keep in mind that there are other facets to hedging to consider beyond a simple accounting of risk and return. For example, the authors do not consider the potential behavioral benefits of a hedge: investors may be more patient during bear markets if they have at least one position in their portfolio that is outperforming. Perhaps for some investors the cost of hedging is tolerable if it minimizes the risk of selling at a market bottom out of fear.

There are no universal hard-and-fast rules for deciding if hedging is economically feasible, but Harvey and company make a strong case for remaining wary of hedges. Based on this study’s results, most investors should look elsewhere, such as quantitative, rules-based tactical asset allocation strategies favored by The Milwaukee Company, for risk-management solutions.