Financial researchers have assembled a small library of empirical support for explaining the existence of excess return over a relevant benchmark as the byproduct of one or more asset pricing anomalies. The factor zoo, as it’s derisively called, now ranges from the well-known value and small-cap risk premia to hundreds of lesser-known anomalies.

By this reasoning, the simplicity of the capital asset pricing model’s single-beta mapping has given way to a multi-dimensional universe of empirical risk factors a la the arbitrage pricing theory. That implies greater opportunity but also greater potential for trouble since the relationship is weak, at best, between portfolio-design complexity and higher risk-adjusted return.

“The rate of factor production in the academic research is out of control,” complain professors Campbell Harvey (Duke) and Yan Liu (Purdue) in “A Census of the Factor Zoo.”  They recently counted over 400 factors identified in papers published in leading academic journals over the last several decades.  The authors note that if this trend were to continue until 2037, the factor zoo would be inhabited by nearly 800 inmates. An exceptional run of intellectual productivity, to be sure, but “surely, many of them are false,” they grumble.

Regardless of the actual number, deciding how to analyze, build and monitor portfolios could overwhelm even the most enlightened investor if, in fact, there are a myriad of risk factors impacting portfolio returns. Rebalancing, for instance, is far less intuitive and subject to much greater uncertainty than standard theory suggests, even if the true number of relevant factors is a relatively light dozen or so.

But a recent study suggests explaining portfolios from a risk perspective may be less complicated than the surge of reported anomalies research suggests. Momentum, a pair of academics advise, appears to explain many risk anomalies for equity investing. Or as they put it in the paper’s title: “One anomaly to explain them all.”

That’s probably going too far, but Jack Favilukis (University of British Columbia) and Terry Zhang (Australian National University) report that a careful reading of results from sorting portfolios on three-dozen anomalies suggests that momentum strategies (buying winners and selling losers) is a common driver. Simply put, “many other asset pricing anomalies are not particularly anomalous.”

This may come as something of a revelation to the countless researchers through time who collectively have built the factor zoo, one seemingly independent anomaly at a time. Investors, fund companies and other corners of the financial industry’s ecosystem may be perplexed (and perhaps threatened) as well. Indeed, if Favilukis and Zhang are right, some of the usual efforts to slice, dice and exploit various risk premia may be redundant and perhaps even counterproductive.

But let’s not get ahead of ourselves. One paper hardly reverses decades of research. Nonetheless, the authors advance a tantalizing and arguably controversial idea. At the core of their results: a buy-and-hold portfolio of equities for a given anomaly can be explained through a momentum lens. As the paper’s Figure 1 shows, the authors posit that “if it is especially profitable to implement a conditional momentum strategy for a portfolio of firms, then that same portfolio is likely to have an especially low unconditional or buy-and-hold return.” 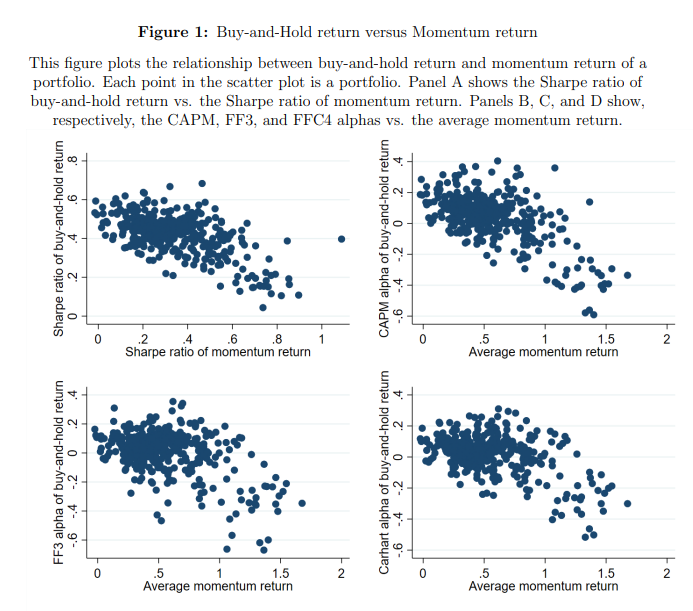 It’ll be interesting to see how other researchers interpret and replicate these findings. Meantime, Favilukis and Zhang offer what’s sure to be a contentious conclusion for both academics and practitioners, namely: independent factor strategies are in fact closely related, if not dominated by momentum.

Flipping the paper’s findings around from the perspective of momentum investing offers a somewhat different lesson. If momentum is an amalgam of multiple factors in some degree, then signal diversification for a momentum-based strategy is essential – perhaps more so than previously acknowledged.

In any case, the authors claim they’ve discovered “a new empirical finding” and this finding “can explain up to 50% of the returns on anomaly portfolios identified by the financial economics literature.” If this result holds up in subsequent research, Favilukis and Zhang’s paper may be destined to reorder expectations and practice for factor analytics and investing in the equity space.