The U.S. economy continues to look fairly strong, but has shown some indications of a potential slowdown in growth.  In the second quarter of 2019 GDP grew at an annualized rate of 2.0%, its slowest in five years.  However, over the past year Real GDP (i.e. inflation-adjusted GDP) grew at a fairly stable rate of 2.28%.  Consumer spending, which accounts for nearly 70% of GDP, also continues to look strong growing at a year-over-year rate of 3.7%.  Meanwhile the job market also looks strong with the unemployment rate at a near historic low of 3.7% and wage growth at a relatively strong 3.2%.

Industrial production jumped by 0.6% in August, its largest increase in a year, however, U.S. manufacturing still remains in a technical recession with output up only 0.36% over the past year.  Additionally, the ISM manufacturing index has been trending downward over the past year, and dropped below 50% this past month.  (Readings less than 50% indicate worsening manufacturing conditions.)  Much of the weakening in the manufacturing sector can be attributed to a weakening global economy and headwinds from the U.S. and China trade war.

Despite the overall fairly strong economic data, the tone for the month of September was highlighted by another Federal Reserve rate cut.  This marks the second rate cut in the past two months, with last month’s rate cut being the first since 2007 (i.e. before the 2008-2009 market crash).  While the Federal Reserve has suggested that the rate cuts are more of an adjustment rather than the start of a quantitative easing cycle, it has many investors worried on the Fed’s economic outlook.

The recent rate cuts have aided in widening the very narrow yield curve as it puts downward pressure on shorter-term rates.  After inverting in mid-August, the spread between the 10-year and the 2-year treasury yield has widened to 0.06% and reached as high as 0.11% earlier in September.  (An inverted yield curve has preceded all five of the last recessions, albeit by an average of 17 months.) 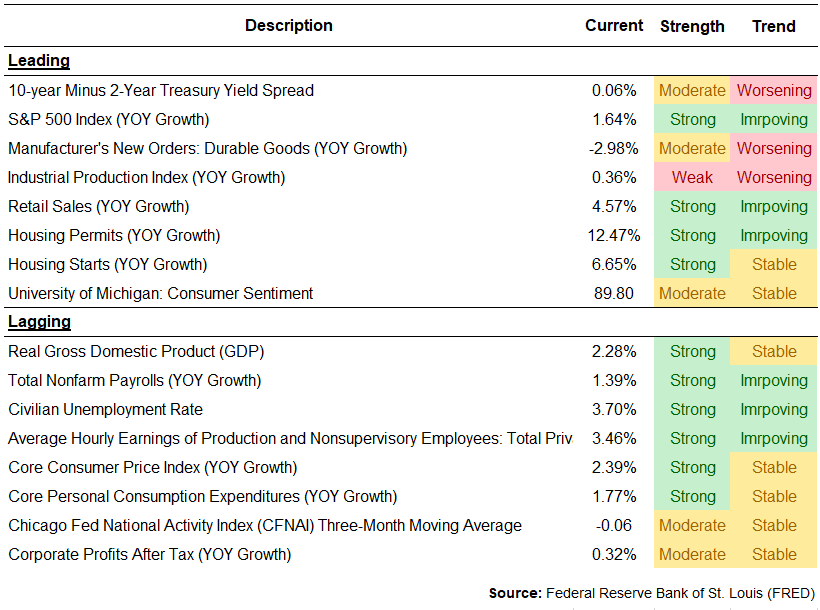 During the month of September the overall stock market moved largely higher as U.S. and China trade optimism was regained.  Conversely, the price of gold dropped approximately 3.4% as investors sold the haven metal.  Despite the recent drop in the price of gold, it has still rallied nearly 14.5% so far this year amid falling interest rates, slowing global growth, and trade concerns.

Despite headwinds of falling interest rates, slowing global growth, and trade concerns, the overall stock market has moved largely upward so far this year after coming off the lows of the late 2018 market correction.  In that time frame, U.S. stocks have outperformed international stocks as a slowdown in global growth weighs heavier on international markets, and more particularly emerging markets.  Meanwhile, the performance gap between U.S. large-cap stocks and U.S. small-cap stocks continues to widen as small-cap earnings suffer.

While falling interest rates hindered investor confidence and stock market returns, it has posed well for real estate as lower mortgage rates bridges the affordability gap for home buyers.  With that said, real estate continues to be one of the top-performing asset classes this year with a return of approximately 28.2%.

So far this year, low-volatility and growth based equities have dominated in performance with returns of 24.0% and 23.0%, respectively.  Since May of this year, low-volatility equities have risen to be among the top-performing factors, as recent market volatility negatively impacted the other more volatile factors.  Meanwhile, value and dividend based equities have lagged other factors as the market rally has benefited more growth orientated equities.  However, value and dividend based equities were the best performing factors in September with returns of 3.8% and 5.1%, respectively.  The size factor have also lagged most other factors as small-cap equity earnings suffer.

The Federal Reserve cut the Fed Funds Rate by a quarter percent both in August and September of this year, with August’s rate cut being the first since 2007.  Consequent of the first rate cut in August, interest rates came crashing down and sent the bond market considerably higher.  However, despite the rate cut in mid-September, the overall bond market finished the month mostly lower amid regained trade optimism between the U.S. and China.

At the beginning of the year, the 10-year treasury yield started at 2.66% but has since fallen to 1.67% at the end of September.  By no surprise, longer-dated bonds have benefited the most from falling interest rates as long-term treasuries (i.e. 20+ years) are up approximately 19.7% so far this year, while intermediate-term treasuries (i.e. 3-7 years) are up only 6.0% this year.

Important Disclosures:  Please remember that past performance may not be indicative of future results.  Different types of investments involve varying degrees of risk, and there can be no assurance that the future performance of any specific investment, investment strategy, or product made reference to directly or indirectly from Diversify & Conquer℠, will be profitable, equal any corresponding indicated historical performance level(s), or be suitable for your portfolio.  Due to various factors, including changing market conditions, the content may no longer be reflective of current opinions or positions.  Moreover, you should not assume that any discussion or information contained in Diversify & Conquer℠ serves as the receipt of, or as a substitute for, personalized investment advice from The Milwaukee Company™.

In addition, Diversify & Conquer℠ may contain links to articles or other information that are contained on a third-party website.  The Milwaukee Company does not endorse or accept responsibility for the content, or the use, of the website.  The Milwaukee Company assumes no liability for any inaccuracies, errors or omissions in or from any data or other information provided on the pages.  Thank you.