London Business School’s Elroy Dimson, an emeritus finance professor, memorably defined risk as the possibility that more things can happen than will happen. Picking up on this description, the late, great institutional investment adviser Peter Bernstein once explained that Dimson’s view of risk points investors on a particular analytical path. “If more things can happen than will happen, we can devise probabilities of possible outcomes, but — and this is a big ‘but’ — we will never know in advance the true range of outcomes we may face.”

Certainty, as always, is off limits when attempting to forecast the future. But developing reasonable estimates through simulations is often the next best thing.  Sometimes it’s the only thing, short of guessing. The tools of the trade vary far and wide, but a staple in this corner of analytics and testing is “bootstrapping”, a type of random sampling that generates synthetic distributions that may otherwise be unavailable.

The methodology is credited to a 1979 paper by Bradley Efron (“Bootstrap Methods: Another Look At The Jacknife” in The Annals of Statistics). When this research was published, the computational difficulty associated with using bootstrapping methods for investment analytics and elsewhere made it impractical in most circumstances.  However, the once unimaginable advances in computer processing and statistical software (and a commensurate decline in the price tag for accessing the analytics) since the article was published have transformed bootstrapping into a tool that’s essentially free for the asking and widely available.

These Boots Are Made For Sampling

If you’re pondering how the risk landscape for markets and investment strategies could unfold in the future (and who isn’t?), bootstrapping’s a solid way to begin the critical task of looking ahead. The basic idea behind bootstrapping is generating thousands of simulations by resampling the existing data to consider how a distribution may vary. Bootstrapping has flaws, but it can reduce the uncertainty, to a degree, by generating a wide array of possibilities for pondering alternative scenarios. With the synthetic data in hand, we can run any number of relevant tests, such as reviewing standard errors, confidence intervals and performing hypothesis testing.

Perhaps the greatest power of bootstrapping is the ability to approximate an answer when little if anything is known about an asset or strategy’s true distribution. That’s not an uncommon challenge in investment analysis–assessing a new strategy (or one with a limited record), for instance. Bootstrapping can help close the gap between what’s known and what could happen.

One way to utilize bootstrapping when conducting simulations is to fire up the boot library in R, which offers a rich set of tools that are inspired and guided by the book “Bootstrap Methods And Their Application,” an influential resource in the field.

As a test run, let’s set up a toy example and imagine that we’re focused on a routine factor analysis of a broad portfolio of U.S. stocks via an ETF: iShares Russell 3000 (IWV). For modeling, we’ll use the available history of nearly 20 years of monthly returns (July 2000 through June 2019) and take a page from the Fama-French 3-factor model, which targets three betas: the overall stock market, along with the small-cap and value factors. For factor proxies we’ll use a trio of ETFs:

The question before the house: What to expect for beta exposure for each of the three risk factors from the perspective of holding iShares Russell 3000? A preliminary estimate can be found by running a simple linear regression, which produces the expected results, as shown below in a standard ANOVA (analysis of variance) table. 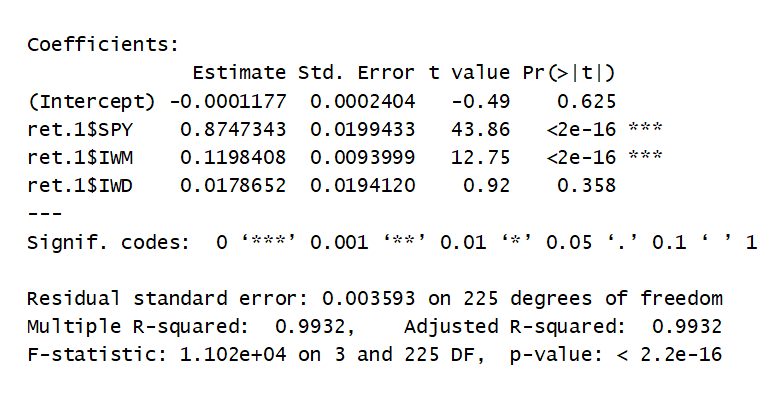 The market beta via SPY (indicated by the ret.1$SPY row) dominates the risk profile with a beta estimate of roughly 0.87. By contrast, the small-cap (ret.1$IWM) and value (ret.1$IWD) loadings barely register. In fact, the results show that the value estimates aren’t statistically significant. That said, to the extent the loadings beyond the market resonate, the small-cap factor beta of 0.12 is stronger (and statistically significant) compared with value’s virtually nil 0.02. (Note: a beta of 1.0 would indicate that a factor is effectively identical with IWV’s risk profile.)

In short, “the market” beta (based on SPY) explains most of the risk and return features of iShares Russell 3000 (IWV) over the past two decades. No surprise there, given IWV’s market-capitalization design for holding U.S. shares. But the real question is whether the past 20 years are unusual in that the next 20 will deliver different results? Unclear, although we can make an informed guess and say that a large-cap fund (such as IWV) will continue to perform in line with the past. But in the interests of illustration, let’s assume we’re clueless, which leads us to bootstrapping for modeling estimates of how the future could change, or not, for IWV’s beta outlook.

Let’s focus in on a particular bootstrapping methodology, although in practice there are numerous variations, depending on what you’re trying to achieve, the available data, and other considerations.

For this example, the first step is creating permutations of the original time series, from which alternative estimates of beta can be calculated. Let’s keep the output modest and generate 1,000 replications and focus only on the small-cap beta estimates (summary results are shown in the chart). 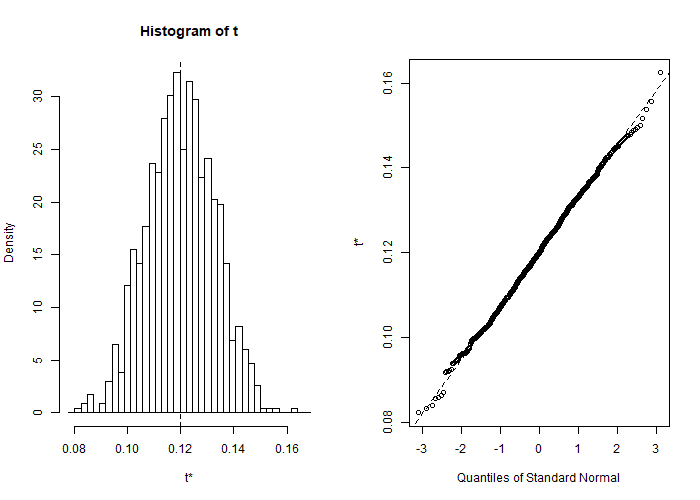 The histogram on the left shows that the distribution of bootstrapped betas for the small-cap risk factor vary from roughly 0.08 to 0.16. That compares with 0.12 for the historical data, which is roughly midway relative to the range of simulations. For more precision, we can extract the range for a given confidence level. For 95%, for instance, the range is 0.10 to 0.15.

According to this bootstrap test, small-cap beta for iShares Russell 3000 (IWV) will likely remain low going forward. We could push the envelope a bit and use alternative distribution assumptions (rather than the normal distribution used in the example above).

Overall, the results aren’t surprising (a large-cap fund is likely to remain a large-cap-driven portfolio in terms of risk), which raises the question: Why bother? In this case, it wasn’t necessary. By contrast, bootstrapping is far more useful when the output isn’t obvious in advance. How might value-at-risk or correlations change in the years ahead for stocks vs. bonds or commodities vs. inflation-indexed Treasuries? What is the expected range of Sharpe ratios for a multi-asset class portfolio if you remove inflation-indexed Treasuries?

With bootstrapping, the possibilities for stress testing risk and other aspects of investment analytics are virtually limitless. It’s not perfect and suffers from the GIGO caveat (garbage in, garbage out). But with reasonable assumptions and carefully choosing variables, bootstrapping allows you to test assumptions, model alternative outcomes, explore how risk and return distributions can evolve in relative and absolute terms, and so much more.

As the authors A.C. Davison and D.V. Hinkley wrote in their book “Bootstrap Methods and Their Application,” this flavor of random sampling has wide application, even when other statistical methodologies have hit a wall. “Bootstrap methods,” they remind, “can be applied both when there is a well-defined probability model for data and,” perhaps more importantly, “when there is not.”