A yield curve is simply a graphical depiction of the yields (or interest rates) for bonds having equal credit quality but different times to maturity.  Normally, the yields on longer maturities have to be greater than the yields on shorter maturities to entice investors to assume the greater risk that is associated with keeping money tied up for a longer time.  Simply put, money available today is worth more than the same amount due in the future, because of uncertainty (risk) as to what will occur during the investment period.

However, the general rule that longer maturities pay higher rates isn’t carved in stone. Economic uncertainty can trigger an increase in demand for longer term bonds, pushing the rates on those bonds lower, which in turn can cause the yield to flatten or invert as represented by the red yield curve in the chart below. 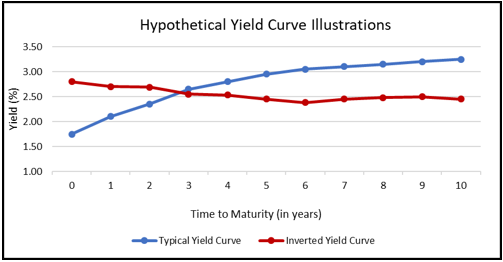 An inverted treasury yield curve has preceded all of the last five recessions (see chart below).  As a result, it is viewed by many as the single best indicator to predict recessions.  The theory that underlies this phenomenon is that, for the most part, market participants (at least collectively) are rational.  Accordingly, if large numbers of market participants are worried about the future of the economy, more times than not those concerns are justified.  In other words, where there’s smoke, there’s fire.

Although an inverted yield curve has consistently preceded recessions in the past, its timing has been far less consistent.  As shown in the table below, when the spread between the 2-year and the 10-year treasury has inverted, it has taken an average of 17 months for a recession to begin.  However, during the intervening period between a yield curve inversion and the start of a recession, the S&P 500 had experienced an average return of 15.7%, with only one negative return in 2000-2001.  With that in mind, the market sell-off that occurred on August 14th seems to have been driven more by behavioral influences than fundamental ones.

In short, the data suggests that steepening of the yield curve following a yield curve inversion provides a more imminent indication of a recession than an inverted yield curve alone.  This makes sense, in that as the economy slows down and transitions from its peak and into a recession, the Fed is pressured to cut interest rates in an attempt to stimulate economic growth.  This ultimately puts downward pressure on the short-end of the curve, and consequentially a steepening of the yield curve.

This time around there are reasons the increased demand for long term Treasuries might not signal a recession is looming.  Previously, worries about the strength of the U.S. economy have typically driven the increased demand for longer term bonds that resulted in the yield curve inverting.  In the present case, almost all of the leading economic indicators are indicating the U.S. economy will continue to grow, albeit at a slower pace.

Furthermore, lower interest rates overseas (and even negative interest rates in places like Germany and Japan) has made U.S. treasuries a more attractive risk-free alternative, which has led other countries to heavily invest in U.S. long term debt and consequently driving their yields lower.

Additionally, the ongoing and ever-escalating trade war between the U.S. and China has negatively impacted the near-term outlook for the economy, but these differences could be resolved before a recession takes hold.

Regardless of one’s outlook on what lies ahead, it seems clear that an inverted yield curve should be regarded as a warning sign of growing economic risk, whether that be slower economic growth or otherwise.  But it is important to remember that a warning is not the same as a prediction, and that history shows that there is ample time for policy makers to implement preventative measures to keep the economy growing.

One thing seems clear; interest rates do not appear to be heading higher any time soon.  In that regard, The Market Commentator’s most recent post: The Sky Isn’t Falling but Interest Rates Are. Here Are Suggestions on How to Respond discusses tactical portfolio adjustments to consider when interest rates are low.