In the search for the holy grail of portfolio design – robust diversification – it’s tough to beat the classic stock-bond mix. If one side of this asset allocation dance is sliding (or rising), history shows that there’s a good chance the partner will be rising (falling). But is too much of a good thing a problem?

The question comes to mind after reviewing a recent paper (“Positively Negative: Stock-Bond Correlation and Its Implications for Investors”), written earlier in the year by analysts at D.E. Shaw, one of the largest quantitative hedge fund managers. After decades of persistently low-but-moderately positive correlations for the two asset classes, the relationship has changed and deeply negative correlations have become the norm.

The shift is useful because it provides a deeper, more robust level of diversification for stock-bond portfolio strategies. But is there a downside?  Possibly.

The lessening of the correlation between stocks and bonds has been a net plus for investors in the cause of building stronger portfolios by way of deeper, richer diversification. But the advantages of negative correlation may have a price tag down the road if the trend unwinds.

Negativity can be a good thing.

Before outlining how and why the risk profile could change, let’s review the evolution of correlation between U.S. stocks and bonds over the past couple of decades. We’ll use a pair of index mutual funds as proxies: Vanguard 500 (VFINX) for equities and Vanguard Intermediate-Term Treasury (VFITX) for bonds. Correlation in the chart below is measured with daily returns on a rolling two-year basis. 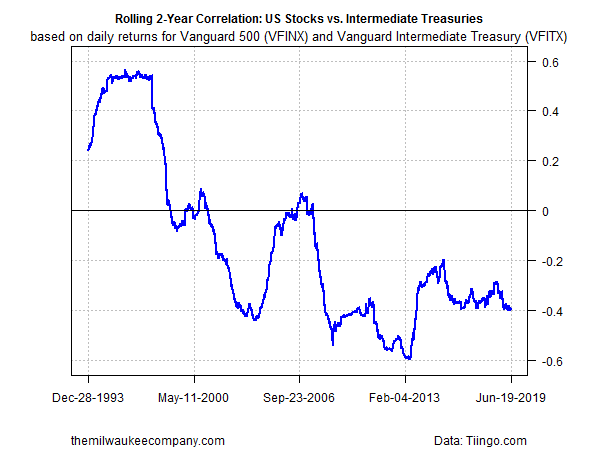 The key takeaway: the stock-bond correlation shifted to a negative print years ago. Except for a handful of brief exceptions, the correlation for U.S. equities and Treasuries has consistently run at below-zero levels for much of the past 20 years. That’s a notable shift from what had been the norm since the 1970s through the late-1990s: low, persistent positive correlation.

Cynics may be quick to dismiss this secular shift as a U.S.-only phenomenon, but the D.E. Shaw research demonstrates that the trend has been a global affair. Germany, Japan and the United Kingdom, the paper points out, have also experienced a decline in correlation to negative readings between domestic stock and bond markets.

D.E. Shaw theorizes that the negative correlation is a byproduct of central banks’ disinflationary policies in the U.S. and elsewhere over the past generation.

The negative correlation regime observed in recent decades has been driven to a large extent by the success of the U.S. Federal Reserve and other developed-economy central banks in reducing inflation and keeping inflation expectations relatively anchored. This success, in turn, has resulted in asset price fluctuations generally being driven by perceived changes in the strength of economic activity or shifts in risk sentiment – developments that generally induce a negative correlation.

The change in the return structure for equities and fixed income is more than an academic curiosity because it’s reordered the landscape of risk-return opportunities for investors vis-a-vis the design and management of portfolio strategies. As D.E. Shaw observes:

The negative correlation has sharply increased the hedging utility of bonds to investors in their efforts to construct diversified portfolios. Indeed, if investors were pursuing a simple mean-variance portfolio optimization with just stocks and 10-year bonds, a shift in the correlation from 0.4 to -0.4 would, with unchanged risk premia, cause them to more than double their target holdings of bonds.

Alternatively, the slide in correlation offered the opportunity to raise equity weightings without a commensurate increase in portfolio risk (compared with the same level of equity allocation when correlation was positive). Welcome to nirvana for portfolio strategy.

Like most opportunities in markets, the decline in correlation is conspicuous in the rear-view mirror. No one knows how many investors, money managers and institutions availed themselves of this good fortune over the past 20 years, but early adopters are a rare breed when it comes to exploiting new investment innovations. In fact, some analysts warn that higher risk premia (or lower risk) for so-called investment anomalies tend to look far more enticing on an ex post basis vs. real-world results.

A widely cited example: the historical outperformance enjoyed by value stocks. A strategy of buying deeply discounted shares has dramatically outperformed the broad stock market over the long run. Impressive, but it’s a bit of an illusion since systematic value investing is a relatively recent development and so few investors pursued the value factor early on, when the results were considerably stronger. Once the crowd discovered the opportunity and the world piled in, the associated risk premia fell, or so runs the argument.

Is something similar unfolding vis-à-vis negative correlation between stocks and bonds? Maybe, but even if exploiting this change has been the exception there’s a more pressing issue to consider: Will there be blowback in the years ahead if and when the correlation slide reverses?

Regardless of whether you were a beneficiary of negative correlation, you may pay a price if the trend unwinds. D.E. Shaw estimates that the increased allure of bonds in recent years as a strategic asset has cut the risk premium for the 10-year Treasury by roughly 100 basis points since the late-1990s. The decline has generated significant capital gains for investors in U.S. markets – more so for global strategies, courtesy of the slide in foreign correlations.

Will the negative-correlation regime endure? Quite a lot of the answer (a.k.a forecast) is bound up with expectations for central banks. In particular, can the Fed and its major counterparts around the world continue to convince the markets that the inflation outlook remains subdued?

For the moment, that’s hardly a challenge. Core measures of U.S. inflation are running modestly below the Fed’s 2.0% inflation target. Meanwhile, Japan’s long-running disinflationary challenge remains intact and the European Central Bank is considering a new round of monetary stimulus to offset what appears to be an economic slowdown in the currency bloc.

More generally, the global economy is still struggling to overcome the disinflationary shock that continues to reverberate after the 2008-2009 financial crisis.

The Financial Times recently reported that a huge pile of the world’s bonds – nearly $12 trillion worth of fixed-income securities – carry sub-zero yields. The not-so-subtle implication: disinflationary if not deflationary winds continue to blow.

When and if the low-inflation regime runs its course and reverses is unclear. Whenever that date arrives – if it arrives – the implications will be more than trivial. D.E. Shaw anticipates quite a lot of risk is waiting in the wings for this future turning point:

If central banks were to lose their grip on inflation or allow policy to become more erratic, we would expect a significant and painful reversal of the favorable market dynamics that have characterized the past two decades. The term premium would likely shift higher, and investors would face a substantial increase in aggregate portfolio risk, as stocks and bonds would begin to move together.

Such a change appears unlikely for the near term, and perhaps is several years off. But the future is forever uncertain and markets are endlessly dynamic. No matter how convincing the trends look in the rear-view mirror, the standard caveat applies because, as the financial illuminati like to say, stuff happens.

What’s an informed investor to do? Start with the obvious and keep a close eye on monetary policy trends and inflation data. Although the outlook appears benign on both counts, the implications of Hyman Minsky’s Financial Instability Hypothesis are always lurking, namely: stable economic conditions plant the seeds for future instability. In other words, economies and markets are inherently unstable.

Capitalism is prone to fleeting yet repeating periods of “failure”. Growth begets recession, calm engenders volatility and so the cycle endures. Another so-called Minsky moment is always approaching.

By James Picerno, director of analytics

Important Disclosures:  Please remember that past performance may not be indicative of future results.  Different types of investments involve varying degrees of risk, and there can be no assurance that the future performance of any specific investment, investment strategy, or product made reference to directly or indirectly from The Milwaukee Company™, will be profitable, equal any corresponding indicated historical performance level(s), or be suitable for your portfolio.  Due to various factors, including changing market conditions, the content may no longer be reflective of current opinions or positions.  Moreover, you should not assume that any discussion or information contained in The Milwaukee Company™ serves as the receipt of, or as a substitute for, personalized investment advice from The Milwaukee Company™.