Supreme Court Justice Potter Stewart famously punted when trying to define pornography, although he wryly admitted that “I know it when I see it.” The same might be said of financial bubbles.

When The New Yorker asked Eugene Fama, a founding father of indexing, to comment on the so-called credit bubble that preceded the 2008 financial crisis, he refused to take the bait. “I don’t even know what a bubble means,” he said. “These words have become popular. I don’t think they have any meaning.”

Perhaps, but that doesn’t stop anyone from trying to identify the danger signs in advance in an effort to avoid the blowback from the bursting of the next bubble. Granted, precisely defining a market “bubble” is difficult, perhaps impossible, although everyone (or most everyone) knows one when they see it, at least when it’s in the rear-view mirror. Calling bubbles in real time, by contrast, is something else entirely.

If such a thing as a general definition exists, financial columnist Jason Zweig’s description may come closest to hitting the mark: “A mania; a rise in asset prices that seems irresistible at the time and irrational in retrospect,” he wrote in “The Devil’s Financial Dictionary,” a compendium of Wall Street lingo.

However you define or label it, no one can deny that markets are prone to periodic crashes and bubbles almost certainly play a role. No wonder that the financial world has moved heaven and earth over the years to develop real-time estimates of bubble risk.

The results, however, are mixed, and that’s being generous. No one has developed a flawless set of tools for deciding when markets, after succumbing to irrational exuberance, are poised for collapse. Markets, as the old saw reminds, can stay irrational for longer than you can stay solvent. Nonetheless, some bubble models, warts and all, are better than others.

Enter the real-time bubble-detection kit developed by a trio of researchers. In a now widely read set of studies published in the International Economic Review, Peter C. B. Phillips (a professor at Yale) and colleagues outlined a tool for spotting excessive bouts of bullishness via an objective econometric lens.

In contrast with many other attempts to recognize when the market goes manic, the PSY model (so named for the surnames of each author) uses a rigorous framework that’s “recognized by central bank economists and fiscal regulators, as well as more widely in the financial industry and financial press,” the professors write in a recent follow-up paper. Among the institutions that have adopted this exuberance indicator is the Federal Reserve Bank of Dallas, which uses the model to monitor international housing markets.

Phillips and a co-author also report in a 2017 paper that “the PSY procedure was applied to S&P 500 stock market data from January 2005 to March 2009. The test switches on a warning signal in January 2008 (lasting for three months) and again upon the Lehman Brothers bankruptcy in September 2008, capturing key discontinuities in the financial environment during the [Great Financial Crisis].”

Even better, the authors have recently rolled out PSY code for Matlab and R, which allows anyone and everyone to run this bubble-monitoring tool.

The stakes are high, of course – sky high, potentially. The ability to detect financial bubbles early – before they burst – is, in theory, a gold mine of opportunity for investors. Sidestepping market crashes – such as the 2008 meltdown – offers the possibility of earning dramatically improved results compared with suffering the consequences of riding the rollercoaster all the way (or even partially) down.

An elegant model doesn’t guarantee success, but PSY has impressed many analysts. The glitch is that it’s yet to be stress-tested in real time during a financial crisis a la 2008. But what we know so far looks encouraging.

A Simple Test of the Concept

Let’s examine the efficacy of PSY’s early warning signals by focusing on a bare-bones version of the model, if only to check if the underlying concept stays afloat in broad terms. At its core, PSY’s engine is an augmented Dickey–Fuller test (ADF) that searches for bubbles. The purpose of an ADF evaluation is to determine if a unit root is present in the time series. If so, this statistical test tells us if, say, a stock market index has become non-stationary and therefore appears to be at higher risk of explosive behavior.

Let’s kick the tires on this idea by putting the simple ADF profile to the test using everyone’s favorite benchmark of U.S. equites, the S&P 500 Index. For parameters, we’ll focus on one-year returns to minimize noise. The objective: analyze recent history (via rolling 36-month time windows) for deciding if bubble risk has been high or low on an ex post basis. 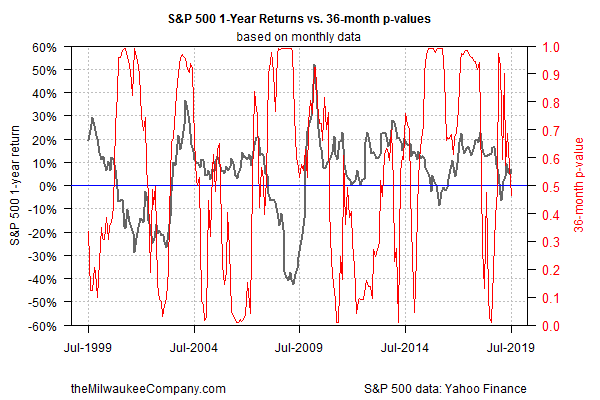 The results shown in the chart suggest that elevated p-values (generated by the ADF test) indicate bubbly conditions. Although the historical relationship between this simple bubble index and one-year stock market returns is far from perfect, the data tell us to beware whenever the p-value rises above 0.9 – a state that anticipates comparatively low or negative S&P performance in the near-term future for the one-year change.

Can you rely on this metric to reliably identify any and all bubbles in the future? Will this simple test give you an early warning just as the exuberance is set to evaporate and prices fall? No one knows. Bubbles tend to burst, eventually, but it’s never clear in advance when the day of judgment will arrive. The future is still uncertain no matter how many statistical tests you run.

Then again, there’s no reason not to run this ADF test, along with the PSY model and other statistical checks. There are no silver bullets in finance, but there’s lots of opportunity for developing perspective.

You might, for instance, consider how the ADF test data compares with the stock market’s valuation – the CAPE ratio, for instance. Looking at trailing returns in context with the historical performance distribution can also signal when current conditions appear extended.

The point is that when several proxies for bubble risk are flashing warnings, there’s probably a good case to err on the side of caution. That’s still a forecast tied to a probability, but when the canary bubble sings, trouble may follow.

Intelligent risk management is all about making decisions that are informed with reasonable probability estimates of what may be coming and so there’s no reason to ignore robust signs of bubble risk. Sometimes those estimates will be wrong, but that’s a reminder that going to extremes — in asset allocation adjustments or relying on one risk indicator — is almost always a bad idea.

Keep in mind, too, that financial pain isn’t destined to be exclusively linked to bubbles. Other things can go bump in the night and splash excessive amounts of red ink on your investment statements. In short, don’t be lulled into a false sense of security simply because bubble risk appears low.

By James Picerno, director of analytics